In what appears to be an unintended effect of conservation efforts in Southwest of China. Three Asian black bears are increasingly raiding farms and homes of residents inhabiting nearby villages. The black bear population in the certain areas has grown considerably since a government ban on bear hunting in the early 1990s.This year alone at least 26 villages in Gongshan County, Yunnan Province have experienced similar bear problems, with scarecrows, bells and dogs proving ineffective at keeping bears out of inhabited areas. It is believed that the bears are making incursions into the villages because of a lack of food in the mountains where they dwell. ?So the scientist needs to dart some these problem makers to move other areas and also put a radio collar to track his activities.

Not Include: all items not listed on INCLUDED, international and internal air fare, hotels in city before/after hunt, personal natures, tour (we can make arrangement) . 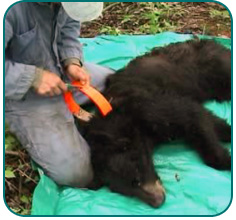